This app has excellent uses in education and more specifically in the classroom. I can think of a dozen reasons why this would be useful to a teacher. The offline tabbed browsing and file download features are really good but the ability to share your iPad screen over a HDTV is what really opens this app to the education sector. This is especially true for those schools that still do not have data projectors in every room. It is an app that certainly gives us another option anyway! The article was put together by the guys over at http://www.ipadcreative.com.

iCab Mobile has been out for a few years on iOS, initially released for the iPhone, it is now a Universal app. This uber-browser has so many additional features that recommend it over the default iOS browser, Safari.
Extra features
These features include tabbed browsing, file download manager (including video saving direct to iPad Photo app), Evernote / Instapaper / Read it Later / Dropbox integration via Modules, Fullscreen mode, Import/Export of bookmarks to and from a computer, Filters for ads, highly configurable options and lots more.
But the option that we especially love is the VGA output. Especially when used in conjuction with Apple's new Digital AV Adapter. Why?
It's a matter of scale 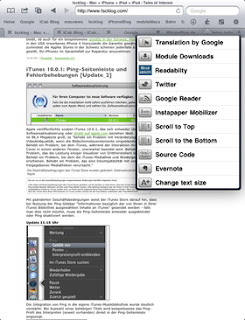 Well, the iPad's 1024 by 768 display looks great on the 9.7" device, but tiny on a normal HDTV as it displays in it's native 4:3 format with big black borders left and right. Apps that are not VGA output enabled display their output inside that little window, which is to be expected of course.
(Other apps and websites like YouTube and the Videos app do play at full width on an HDTV, making the video far more watchable.)
In the UK, BBC iPlayer is a big deal for TV catchup, in Australia it is the ABC iView and importantly on-demand TV, but both the iPlayer app and website play video inside the native resolution, which doesn't cut it when you are sat 16 feet away on the other side of the room.
iCab saves the day
iCab though enables fullscreen web browsing (very useful for demos and browsing Flickr for example), pages are shown at the full width of your HDTV screen and importantly the video output by these sites also fills the screen when you play them.
The students are very happy!
We think this entirely justifies the very reasonable $2.49  price tag for iCab Mobile [iTunes link] and we hope this will help those of you hoping to have fullscreen display out of your iPad 2 via the Digital AV Adapter, for web content at least.