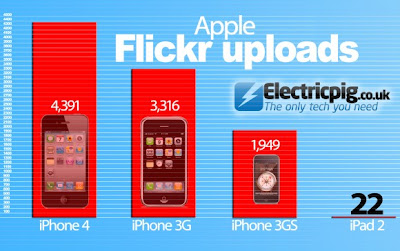 http://electricpig.co.uk
I was reading some stats the other day about the lack of people using the cameras on the iPad. I was a little taken aback by the fact that so few people were actually taking up the opportunity to the use their built in cameras, especially the video capabilities.

It is a gentle reminder that we have access to these cameras and should be making the most of the opportunity. It is after all another tool to;
The following is a clear and concise set of tips for getting the best quality footage from the guys at iPad Creative. These guys have a great blog about how the iPad is being used in the creative fields of music, graphic design and the Visual Arts, however they are also very generous with their blogging about the use of iPads in education and as a tool for learning. Their site is well worth the visit. Enjoy the article from the team at iPad Creative - James Burland and Phil Mabey.


The amount of content created on the iPad will go through the roof with the  720p HD video camera.
It would seem that the iPad 2's HD camera is broadly similar in specification and quality to the latest iPod touch camera. If you intend to use your new iPad 2 to capture some decent video you'll do well to consider the following 10 tips.
1) The camera unit is not capable of auto-focus. It does have a rather large focal range, but be careful when shooting close-up shots. It appears that 25 to 35cm is the distance at which things start to get blurry.
2) It may not have touch focus controls, but it does have touch exposure controls, use these wisely. Making sure that you have captured a full dynamic range should be quite straightforward when shooting video with a monitor that large and touch exposure controls.
3) Like many rolling shutter based video cameras the iPad 2 suffers from considerable motion distortion. Try to keep iPad movement to a minimum and when panning remember to pan slowly. It's also worth noting that iMovie for the Mac has a powerful filter for reducing motion distortion. We would love to see this feature in the iOS version of iMovie. How about it Apple?
4) If you have to capture video content in a low light situation look for ways to bring some extra light to the scene. Unlike the iPhone 4, the iPad 2 has no LED video light. Expect a big increase of image noise and motion trails as the available light is reduced.
5) Use the bulk of the iPad to your advantage. Hold the iPad with both hands and push your elbows into your abdomen for extra stability when shooting video. Your iPad 2 footage should be considerable less shaky than anything shot on the iPhone, or any other smartphone for that matter.
6) The iPad 2 camera takes quite a while to adjust to a new scene with different light levels. Give the iPad time to readjust before you begin your shot. Don't move from one lighting situation to another in one continuous shot unless you have no other option.
7) Be mindful of the position of the microphone. We have already watched quite a few iPad 2 clips with poor sound quality precisely because the microphone is being covered by the owners hand.
8) Shoot and edit on the fly. With that capacious battery life, large screen and iMovie app, why not shoot and edit in near realtime? That way you'll get a feel for how your production is flowing whilst still having time to shoot extra footage as required.
9) Make use of the front facing camera. Though clearly not as good as the HD rear facing camera, the front camera is nicely colour balanced and is certainly good enough for the occasional commentary or reaction shot.
10) Mix and match. Both the iPhone 4, iPod touch and now iPad 2 produce very similar video footage, meaning that you can easily combined footage from all three devices without the viewer noticing. If you like the quality of the iPad footage but find it too big as a general purpose video camera why not consider an iPod touch as a companion device.