This is an interesting article from Raju over at Techpp. It makes a start on identifying some of the 200 plus features that have been released in the new iOS 5. While manying blogs and websites are talking about the Top 5 features, it will be how all of the new features work together to make the new operating system something to get excited about. So while you may know about some of the big features, here is a little explanation of some of the less publicised features. Obviously this list is far from complete and we will attempt to add more as the announcement is fully digested. 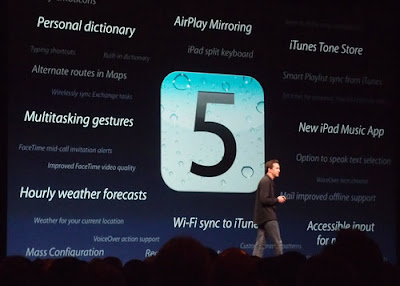 Just as expected, Apple announced the next major iteration of iOS for iPhone, iPod Touch, iPad and Apple TV – the iOS 5. iOS users will be getting more than 200 features with iOS 5, which is expected to be released by Fall of this year and will be made available for Free! Off these 200 features, Apple chose 10 of the most important ones to demo at WWDC 2011. We reserve our views on the same for another post. But we let you go through the list of new features added in iOS 5. This is not exhaustive, but we aim to update the post as and when we get to know more new features.

1. Notifications Center – If you have been an iOS user, you would know how badly a revamp was needed for the notification system. Well, Apple has finally heard your voice and has brought out this Notification center, where you can keep track of the new email, texts, friend requests and more, all in one convenient location. Much like the android notification bar, just swipe down from the top of any screen to enter Notification Center. They are also available on the Lock Screen, as you would expect!
2. iMessage – Apple just killed the major selling point of BlackBerry – the BBM (BlackBerry Messaging). With iMessage, you can send unlimited text messages via WiFi or 3G from your iPad, iPhone or iPod Touch to any other iOS user! Nothing ground-breaking as such, there were some third party apps (like WhatsApp) which used to do similar thing, but with iOS 5, it’s more polished, better, you get it pre-installed and for free!
3. Newsstand – Newsstand is like iBooks for Magazines. Now that Apple has enabled subscription based in-app purchases, they have teamed up with majority of the magazine publishers to offer thousands of magazines right on your iPad or iPhone. App developers like Zinio will be cursing Apple for this.

4. Reminders – It’s a case of yet another app developer going bankrupt with iOS 5 release. There have been innumerable apps for Reminders and to-do lists for iPhone and iPad who were doing really well on the App store. Well, Apple just decided to kick them out by providing the feature right in the OS. Say you need to remember to pick up groceries during your usual shopping trip. Since Reminders can be location based, you’ll get an alert as soon as you pull into the supermarket parking lot. Slick, but not unique!
5. Twitter – Apple has just chosen as the most preferred social networking hub for all iOS users. Yes, Twitter will be tightly integrated within iOS 5. Just set your Twitter account in the settings page and you will be able to tweet directly from Safari, Photos, Camera, YouTube, Maps etc. It even integrates with your contact list!
6. New Camera & Photos – I hate to mention this, but can’t. All those free and paid app developers who were providing basic and advance photo edits should look elsewhere, now that Apple has enhanced the Camera app to use grid lines, pinch to zoom gestures and exposure locks. Camera app will be accessible from the Lock Screen and you can use the volume up button to take a pic really fast. You can now crop, rotate, enhance and remove red-eye right from the Photos app.
7. Reader in Safari – Safari web browser has been upgraded. You finally have the pleasure of Tabbed Browsing in Safari. A new Reader button is introduced which will let you view web articles free of clutter.
8. Wireless media sync (PC Free) – The annoying thing about activating iDevices and also the transfer of files between the iDevice and PC/Mac was the necessity to connect the device to the PC through the cable. Well, Apple has finally put an end to it. With iOS 5 all these happen wirelessly!
9. Mail – Rich text formatting, indentation of texts, flagging, ability to drag and drop addresses are some of the new features added to the Mail app in iOS 5.
10. Calendar – You can now share calendars with your friends and family through iCloud. As you add items to your calendar then updates to all connected calendars are also made.
11. Game Center – Profile picture can be added on to your Game center profile and get new friend recommendations based on the games you play.
12. Wi-Fi Sync – Now you can wirelessly sync your iOS device to your Mac or PC over a shared Wi-Fi. And everytime you connect your device to a power source it will automatically sync and backs up any new content to your iTunes account!
13. MultiTasking Gestures for iPad – Apple had hinted about this sometime back and we will see more of it in iOS 5. Using four or five fingers, swipe up to reveal the multitasking bar.
14. AirPlay Mirroring – With iPad 2, you can now wirelessly stream whatever you have onto a HDTV through Apple TV.
15. New iPad music app...........
Read full article; http://techpp.com/2011/06/07/ios-5-features-list/
Posted by Greg Swanson at 9.6.11