Ten Apps That Show Off the iPad 2's New Hardware

This is an cool article written by Wendy Sheehan Donnell over at pcmag.com. As Wendy says it is not the actual apps that she has written about that is the important aspect of this story, it is the potential that the hardware of the new dual-core processor, camera and gyroscope provide. These apps are really just showcasing what the hardware is capable of.
What we as educators need to be insisting on is the inclusion of these capabilities in apps and e-texts that are being offered for our students. This is so important because it provides the motivation, the impetus and the opportunity for learning to occur at a more engaging and deeper level. Hopefully it also ingrains the need for transferring skills and learning from one situation to another. Enjoy the article.
Ten Apps That Show Off the iPad 2's New Hardware:
These apps capitalise on the best additions to the iPad 2 - its cameras, gyroscope and fast dual-core processor.
If you're getting an iPad 2, you're getting a tablet with hardware that opens up a whole new world of app possibilities. Apple's second-gen tablet integrates a speedier dual-core CPU, a pair of cameras, and a gyroscope—none of which were on the original iPad.
The iPad 2 has only been available for little more than a month, but you can already find apps that take advantage of these hardware upgrades. Take the iPad's new processor: Apple claims the dual-core A5 chip offers more than nine times the graphics power over the single-core CPU in the original iPad. Greater processing power and speed along with richer graphics means good news for game developers—and, of course, gamers. Couple this with the iPad's new three-axis gyroscope, which can sense the iPad's every twist and turn, and you get some truly compelling games.
Adding front- and rear-facing cameras that capture stills will surely result in innovative apps for both work and play. Right now, there aren't too many camera-centric apps; we were only able to find a couple of interesting picks. Apple's own FaceTime, which is preinstalled on the iPad 2, is a blast to use, and it looks great, but you can only video chat with other iPad, iPhone, iPod touch, or Mac users, so it can be somewhat limiting. But once Skype releases its iPad app, you'll be able to video chat on the go with anyone who has a Skype account without paying a dime. We did test the Skype iPhone app on the iPad 2 (just because we could), and found that, while it works just fine, video quality was seriously degraded when you doubled the size of the window to fill the iPad's 9.7-inch screen. You could, however, simply use the smaller, iPhone-screen-size window, which centers itself on the iPad's display. In fact, you can use many camera-centric iPhone apps on your iPad; they'll just look smaller.
Again, developers are just getting started developing for a tablet that's barely been released. The App Store has amassed more than 65,000 tablet-specific apps in the year since the first iPad went on sale, so the coming months are sure to bring some very cool iPad-2-specific apps. But for now, check out the apps you can get today that make the best use of the iPad's new hardware.
Real Racing 2 HD

If you're looking for the ultimate in mobile 3D racing games, Real Racing 2 HD delivers with beautiful, fluid, realistic graphics. Two new gyroscope-based steering methods makes hugging those curves even easier, since you don't have to touch the iPad's screen to steer.
This awesome racing game gets souped-up with additional controls that use the iPad 2's new gyroscope.
Jenga HD 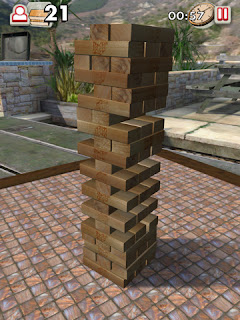 The nailbiter coffee-table block-building game of your youth breaks into the next dimension on the iPad 2. Full gyroscope support means you can simply move the tablet around to get various perspectives on the block pile. For example, placing the iPad parallel to the ground gives you a top-down birdseye view you can't get otherwise. In the iPhone version (sans gyroscope support), you need to flick the screen to move around the board. It really brings a new dimension to the already-fun game. There's a gyroscope lock in the bottom right corner if you'd rather play it old-school by touching the screen to move around.
Google Earth 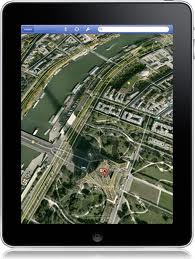 The awesome Google Earth is another app that really showcases the iPad 2's processing and graphics power. The app is visually stunning, moving around is fast and seamless, and you rarely have to wait for a map to redraw. Here's hoping Google adds gyroscope support soon.
iMovie 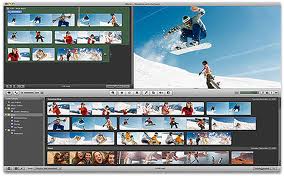 Apple's own desktop video-editing app, iMovie, goes mobile with a new iPad version. The easy-to-use app makes good use of the tablet's touch-screen interface, and lets you clip, add photos, music, themes, and more to the video you capture right on the iPad 2. You can share your cinematic masterpieces in HD directly from the app to YouTube, Facebook, Vimeo, and even CNN iReport. Integrated AirPlay support lets you stream your footage directly to your HDTV via Apple TV or the optional Apple Digital AV Adapter.
Flipboard 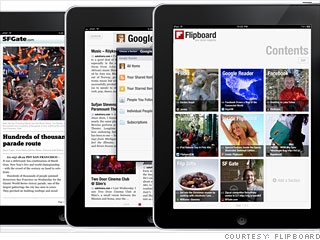 This gorgeous, graphics-intensive, just-for-the Web "magazine" that lets you flip through your news and social media was no slouch on the first-gen iPad, and performance is even better on the iPad 2.
GarageBand 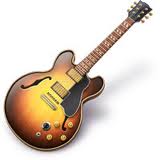 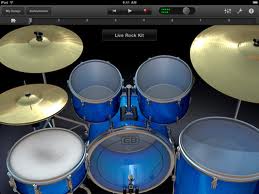 This excellent Mac program translates extremely well to the iPad and is true testament to how much iOS has matured—it's a desktop-class app running on a mobile device. It also showcases the new tablet's processing power. If you don't own the real instruments, GarageBand simulates them on the iPad's screen. For guitar, you tap on the display to play individual notes, strum chords, or bend notes; you can even touch the strings in two places at the same time to palm mute. The intensity at which you strike the notes and chords affects the volume of the sound, like on a real guitar. There's also an on-screen piano and drum kit, which offer similar features and controls.
WebEx 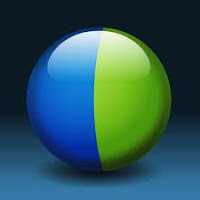 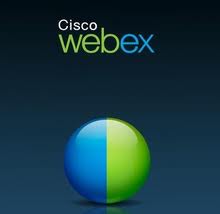 If you need to work, but don't want to be tethered to your desk, this virtual meeting app offers two-way video conferencing that uses the iPad's front-facing camera, but just like with FaceTime, you need to be on a Wi-Fi network to use it.
Twittelator 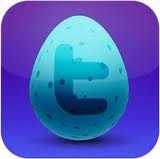 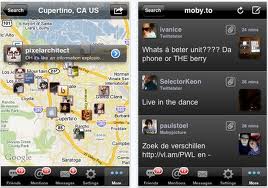 Currently, Twittelator is the only Twitter client that lets you record audio and video, and take photos with the iPad 2's cameras, and use them to help illustrate your tweets.The app itself is full featured with geotagging capabilities, a link shortener, full emoticon and symbol library, and fully customizable panes.
Incredibooth 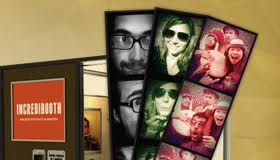 If the sheer fun of Apple's own preloaded Photo Booth isn't enough for you, Incredibooth turns your iPad into, well, a photo booth. Four lens filters let you create different image styles, and after you pose for your close-up in front of the iPad's front-facing camera, you have a photo strip you can either trash, share on Facebook, or e-mail to your friends.
Pocketbooth HD 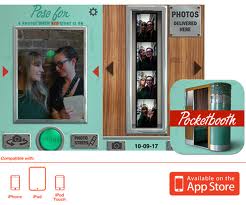 A pumped-up version of Incredibooth, Pocketbooth HD lets you use either of the iPad 2's cameras to shoot, and offers a lot more settings to tinker with. 'Send to Twitter' and 'Print' are additional sharing options you don't get with Incredibooth. Both Incredibooth and Pocketbooth HD give you the retro wood-panel effect of the old-fashioned photo booths from the roller rinks and shopping malls of yore.
http://itunes.com/
Posted by Greg Swanson at 25.4.11