Written by Denis Wong 5th May

There have been a few pilot projects for the use of iPads in the education sector. Last month, Virginia Beach schools spent $651,000 on iPads to distribute to elementary students, while a school district in Maine equipped their kindergartners with iPads. Will the presence of iPads have a positive impact in classrooms? Can it be a proper substitute for computers? That remains to be seen for the prior two cases.

Newer generations of kids are increasingly more tech-savvy than their parents - some elementary kids are getting iPhones, whereas in the last decade most people got cellphones only in high school. Younger people are fast at picking up new technology around them and rarely need to read manuals. But despite this, is placing iPads in the education sector a bit of a premature move and a waste of money, or is it an innovative way to deliver new methods of teaching and even reduce costs?
In the case of Oklahoma State University, not only did the use of iPads end up in monetary savings, but a majority of students agreed iPads enhanced the learning experience. They didn't just give out iPads for students to fool around with - they made the integration of iPads into the class's curriculum a key goal in this pilot project.
The University has released the results of its iPad pilot (via BusinessWire). The test was conducted in five lecture sections of two courses across two colleges and campuses at OSU. Bill Handy, a visiting assistant professor in the School of Media and Strategic Communications, and Tracy Suter, an associate professor in the Spears School of Business, led the pilot. Some of their key findings of the pilot include:
A video with key faculty members of this pilot program may be seen below. 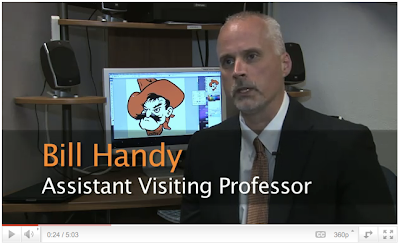 http://www.neowin.net/news/study-ipads-enhanced-learning-experience-at-oklahoma-state-university
Posted by Greg Swanson at 7.5.11