Good news from the guys over at Appletell. This article written by Charles Moore introduces a new iPad connector with a USB port. This is one thing that will help a lot of people wanting to quickly transfer information or files to and from their ipads. I cannot believe it took so long but here it is. 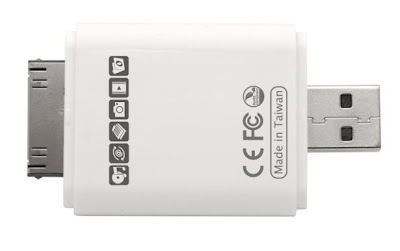 Probably the most frequent gripe about the iPad—and to a lesser but still substantial extent about the iPhone and iPod touch—is the lack of connectivity for data transfers and printing. No USB port(s). No Ethernet. No media card slots. You can’t use pocket USB flash drives. Indeed, a survey of 3,000 iPad 1 owners I happened across last summer found that number one on their missing feature request list was a real USB port (48%), followed by Flash support (44%), and an optical drive (42%). For some of us, wireless just doesn’t cut it.
Well, PhotoFast’s new i-FlashDrive can’t help with the iOS’s lack of Adobe Flash video support, but it does provide a convenient workaround for at least one aspect of the no USB port issue. It claims to be the only two-way storage device on the market for making file transfers between iOS and Mac/PC. Ergo, it’s a compact flash memory drive with a USB port on one end and an Apple 30-pin iDevice connector on the other. The i-FlashDrive comes in 8GB, 16GB and 32GB versions, and there is also a free, complimentary software app that facilitates and coordinates file archiving and backup, management, and viewing, and also includes a text editor and voice recorder.
i-FlashDrive Features: 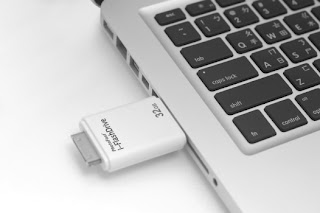 Email ThisBlogThis!Share to TwitterShare to FacebookShare to Pinterest
Labels: ipad with USB, USB for ipad ipad connection to USB